->This kind of collections for Roohi would not be good in normal times but there are lockdown and night curfews and pandemic effect creating problems and in such times these numbers are pretty good and best post pandemic.
-> The Janhvi Kapoor, Rajkummar Rao and Varun Sharma starrer horror comedy Roohi has received mixed reviews. The film which comes after the lockdown has managed to fare rather well at the box office, managing to draw in 03.06 crore on Day 1. The best collections for a Hindi film till date during the pandemic are that of Suraj Pe Mangal Bhari whose lifetime stands at a little over 04.00 crores and now Roohi has come almost close to that on its first day.
-> The last time a Hindi film had its best day; it was on 13th March, 2020 when Irrfan Khan and Kareena Kapoor Khan starrer Angrezi Medium had taken a start of 04.03 crores. Now one year later on 11th March ,2021, it has been almost poetic justice to see a film from the same production team to take the best start ever since theatres came back into action.
-> Roohi that released across all major national multiplexes has managed to collect 01.85 crore from these chains itself.

Roohi Hit / Flop:
Hardik Mehta's Directional venture Comedy-Drama-Horror film Roohi is a good budget movie. Roohi Should cross approx 35.00 Crore Nett all over the India to be called a hit.
Roohi will struggle to collect as this is the first major movie after pandemic and its release it self is a big victory. Conditions are not really good for box office in India for Roohi but its a long process and Roohi is a first step in the direction other movie will gain from.

Disclaimer:
1.This list / Data is complied from various sources and our research.
2 .The figures can be approximate and we do not make any claims about the authenticity of the data. However they are adequately indicative of the box-office performance of the film(s). 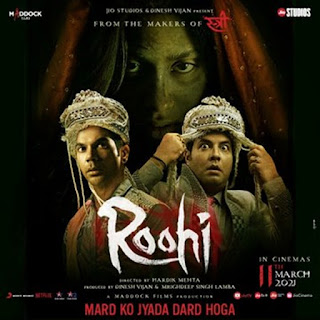